Try a demo of the protocol

The math and definitions explained

Encoding schemes: From characters to integers and bits

In cryptography we often encrypt and sign messages that contains characters, but asymmetric key cryptosystems (Alice and Bob uses different keys) such as RSA and ElGamal are based on arithmetic operations on integer. And symmetric key cryptosystems (Alice and Bob uses the same key) such as DES and AES are based on bitwise operations on bits (a bit is either equal 0 or 1 and is an abbreviation for binary digit). Therefore, we have to convert the characters into integers or bits before we apply the cryptosystem to the message.

Because a computer can only handle bits, there already exists a method for converting characters into integers or bits, that uses the ASCII (American Standard Code for Information Interchange) table. A part of the ASCII table from Wikipedia is listed in the following table (notice that the binary representation on the Wikipedia site is only seven bits but we use eight bits, i.e. we have prepended an extra 0):

E.g. if Alice wants to send the message "Hey Bob!" encrypted to Bob with a symmetric key cryptosystem, she first converts it into its integer representation and then into its binary representation:

In math we are all familiar with the arithmetic operations such as addition, subtraction, multiplication and division. However, a computer works on bit strings, i.e. strings of 0's and 1's, and therefore needs similar operations when given two bit strings. The most important bitwise operations are NOT, AND, OR and XOR. In the following we give the result of the operations with one or two bits as input.

The NOT operation is often represented as !:

The AND operation is represented as \( \wedge \):

The XOR (exclusive OR) operation is represented as \( \oplus \):

Alice and Bob's adversary Eve can make the following types of attacks on a symmetric key cryptosystem such as DES and AES:

Hence, if a probabilistic cryptosystem is CPA-secure the only information that a ciphertext leaks is the length of the encrypted message.

The Data Encryption Standard (DES) cryptosystem was developed by IBM in the early 1970s in association with the United States National Security Agency (NSA) as a modification of an earlier cryptosystem called Lucifer. In 1977 DES was adopted as a government standard and it was only expected that DES would be used as a standard for 10-15 years, however it was a standard until 1999 where developing of its replacement the Advanced Encryption Standard (AES) had begun.

DES is a special type of iterated cipher called a Feistel cipher because the encryption and decryption algorithm are almost the same. The only difference is that during decrypting are the round keys used in reverse order compared to encryption.

The round function \( f \) is illustrated in Figure 2 and executes the following steps: 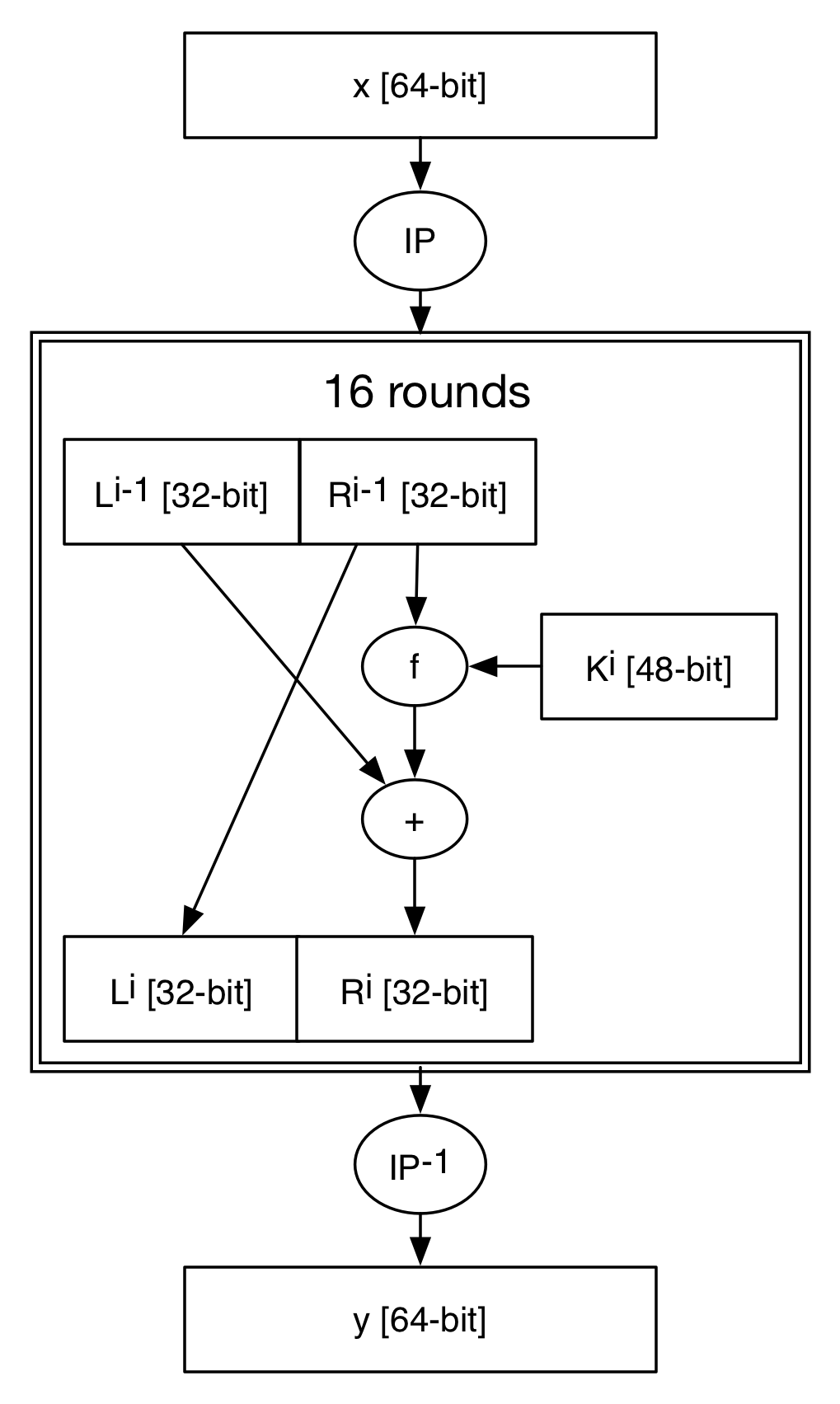 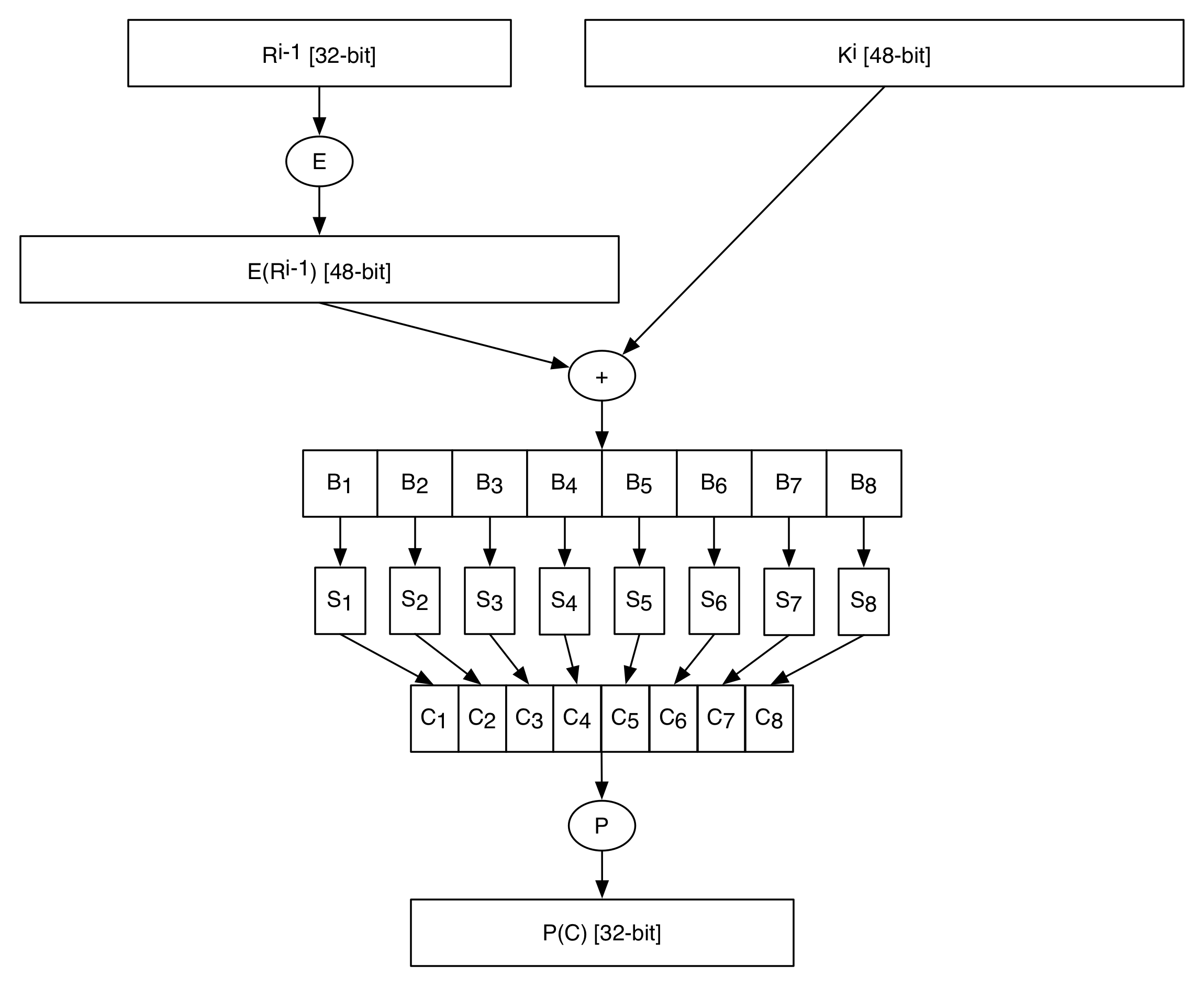 The S-boxes were designed to prevent certain types of attacks, especially a method called differential cryptanalysis which was discovered by IBM in the 1970s but kept secret in almost 20 years until it was rediscovered by Biham and Shamir in the early 1990s. Therefore, at the time DES was proposed some people suggested that the S-boxes might contain hidden trapdoors which would allow the NSA to decrypt messages while claiming that DES was secure. But when Biham and Shamir (re)discovered differential cryptanalysis it was clear that the S-boxes were designed to prevent this type of attack and not to make DES insecure.

A serious flaw of DES is its short 56-bit keys and already in the 1990s it became feasible to break DES by a brute-force attack. I.e. given an input block \( x \) and an output block \( y \), we run the DES algorithm \( DES \) with difference keys until \( y = DES_{K}(x) \), and hence we have found the used key \( K \). One solution to this problem is to use DES multiple times. The most used method is called Triple DES and runs the DES algorithm three times using different keys:

A variant of Triple DES replace the middle DES encryption by a DES decryption, i.e. the middle DES algorithm runs with the round keys in reverse order. Now, if we chooses the keys in this version as \( K_{1} = K_{2} = K_{3}\) it's the same as running the DES algorithm once because we first encrypts and then decrypts the message which have no influence and finally we encrypts the message again. Another variant chooses the keys as \( K_{1} = K_{3} \), which reduces the key size. Finally, a variant called DES-X uses a single DES encryption combined with the input block \( x \) XORed with \( K_{1} \) and the output block \( y \) XORed with \( K_{3} \):

Try a demo of the encryption scheme here.